Libby Day was just seven years old when her evidence put her fifteen-year-old brother behind bars. Since then, she has been drifting. But when she is contacted by a group who are convinced of Ben’s innocence, Libby starts to ask questions she never dared to before. Was the voice she heard her brother’s? Ben was a misfit in their small town, but was he capable of murder? Are there secrets to uncover at the family farm or is Libby deluding herself because she wants her brother back? She begins to realise that everyone in her family had something to hide that day… especially Ben. Now, twenty-four years later, the truth is going to be even harder to find. Who did massacre the Day family?’

This is one of those books that I can sit on forever and not know how to properly write about. Because if I had it my way, this review would be passionate, incoherent babbling and fangirling over Flynn’s crisp storytelling and addictive writing and how I hope to be just like her when I grow up. I’ve recommended this novel to a few people over the past few weeks since I finished reading it, and every recommendation comes with some version of the same sentiment: if I can write half as well as Gillian Flynn someday, I’ll be content.

However, that’s not a real review—not that Flynn’s work even needs my meager addition six years deep in 5-star ratings. When Stephen King calls you “the real deal, a sharp, acerbic, and compelling storyteller with a knack for the macabre,” you don’t need much praise from an aspiring author with a handful of blog and twitter followers in her little corner of the internet. But praise I will, because even if no one ever reads this review, even if it convinces no one to give Dark Places a try, this is one of those books that insists I think—and write—about it.

I read Gone Girl and thoroughly enjoyed it, but once I heard about Dark Places and saw several reviewers I follow on Goodreads rave about it—all of whom are smart, witty, well-read women I’ve come to admire and whose literary opinions I trust—I knew I had to give it a try. Gone Girl was great, but I didn’t find most of the characters as relatable as I would have liked (I actually found Amy the most relatable, personally, which is a terrifying and humbling realization) and the ending was disappointing; this isn’t the case with Dark Places at all. In fact, I’d say the only similarity Dark Places has with Gone Girl is Flynn’s ability to make you care about and relate to selfish and inarguably horrible characters, no matter how much you’d rather not.

You have Libby, who has run her inheritance dry and willingly freeloads, and steals from, people who sympathize with the once-little girl who survived a traumatic tragedy. Then there’s her brother Ben, who may or may not have been responsible for the murder of their two young sisters (also both very unlikable, both in their own ways) and  mother. Tie up the knot with their mother’s inability to properly care for her children, an alcoholic father, and a whole other cast of seedy characters, and you have a book full of despicable people who should turn any reader away from the book in disgust. True to the Gillian Flynn style of characterization, of course, they do the total opposite and pull you in.

The book is a page-turner if I’ve ever read one. I read 100 pages on the airplane while homebound from Greece, then devoured every bit of it I could over the next several days until I finished it. There aren’t many books that leave me groaning in disappointment when I reach my stop on the subway—usually, I’m eager to get as far away from the New York City transit system as I can, as quickly as possible—but while reading this novel, I cherished every spare moment I had to read it. Nearing the end was a conflicting experience: I wanted to finally know the truth, to verify or disprove my speculations IMMEDIATELY, but realizing I’d be closing the door to the mystery, emotion, and terror in this story for good left me struggling against the pull to slow down. The resulting effect was something like a dreading, morbid need, which is exactly how I’m sure Libby feels as she gets closer to the end, herself.

Of course, I can (and probably will) re-read Dark Places, but it will never be the same as working my way through the story for the first time and spewing out frantic, constantly shifting speculations from scene to scene. I’m moving on though, and what better way to get over Dark Places than to delve into Sharp Objects? I’m addicted to Flynn’s dark prose and I’m hoping she has another novel coming out soon because, standing at only 243 pages, this one isn’t going to last me long.

Oh well. There’s always the movie (which is SO well-casted, by the way), which I’m seeing Saturday! Please excuse me while I go scratch my itch—and I suggest you get your hands on this book in my absence.

Have you read any of Gillian Flynn’s work? I’d love to discuss it with fellow readers and writers, so feel free to reach out!

Featuring my short story, "Petals to the Sea!" Download the anthology for free here! 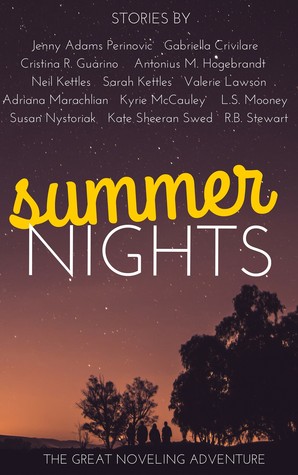